2.2.2. Dissection and measurement in fixed heads The endoscopic transnasal approach to the anterior skull base was simulated to reveal the area exposed in real operations. The distance between the columella and anterior ethmoid artery or posterior ethmoid artery was measured on both sides (Fig. 1). 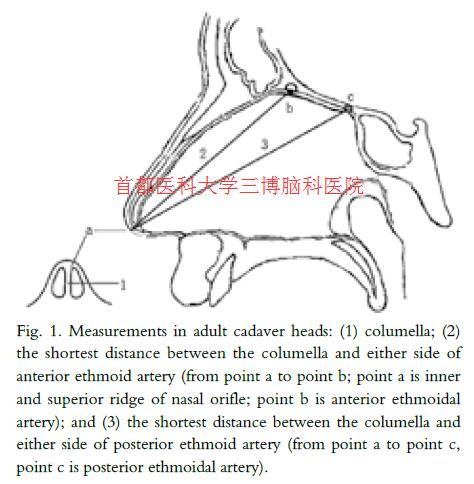 3.1. Important anatomic landmarks of the anterior skull base and endoscopically measured distances between these landmarks 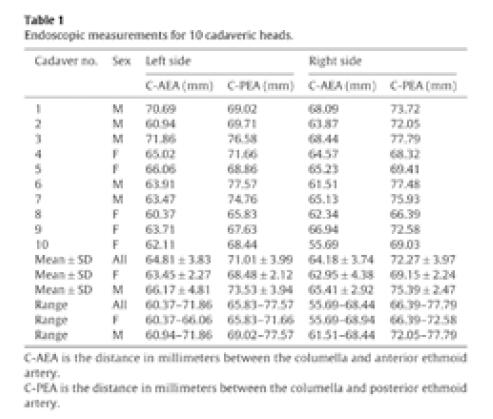 The planum sphenoidale was located in the middle part of the lesser sphenoid wing. Its anterior border was connected to the ethmoid plate and the fronto-ethmoid suture. Its posterior border was at the chiasmatic groove and passed anteriorly to the clinoid process bilaterally. The two structures above formed the roof of the optic canals. 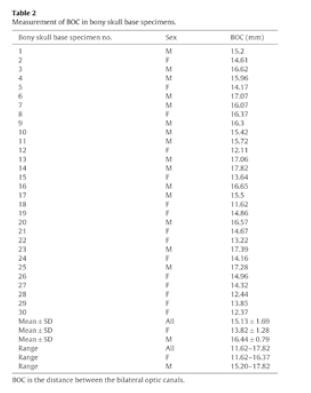 3.2. Anatomy of skull base through the endoscopic transnasal approach

The bony sphenoid ostium was extended by removing parts of the bony nasal septum and parts of the anterior wall of the sphenoid sinus. The posterior ethmoid sinus, bilateral ethmoid plates,and perpendicular plates were resected.Mucosa was removed to locate the anterior and posterior ethmoid arteries. The sellar floor,optic prominence, carotid prominence, and bilateral carotico-optic recesses were observed and identified endoscopically.

3.2.3. Mucosal and bony layer of anterior skull base 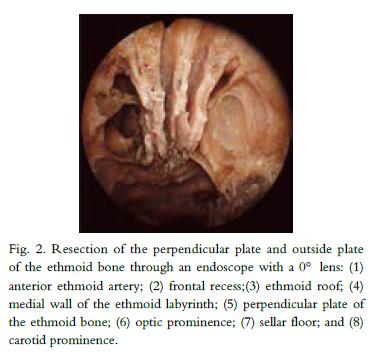 3.2.4. Subdural layer of anterior skull base

The dura mater was dissected to expose the optic nerves, the chiasm, the bilateral olfactory bulbs and tracts, and the frontal cortex (Fig. 3). The exposed area was extended forward to the bulbus olfactorius and crista galli, laterally to the rim of the olfactory tracts,and backward to the optic nerves and the chiasm (Fig. 4). 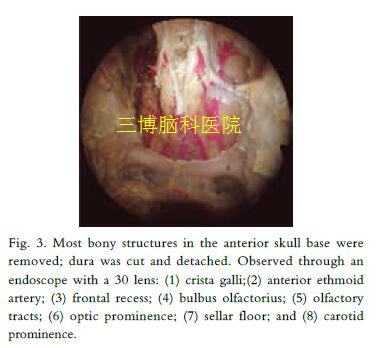 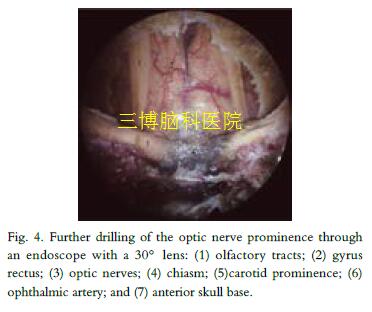 The anterior and posterior ethmoid arteries are important surgical landmarks used for calculating the distance to the columella.Moreover, these landmarks also help describe the position of the above structures. Lee et al. [8] found that the average distance from the midpoint of the anterior ethmoid artery to the inside border of the columella is 63mm on the left side and 64mm on the right side (for 28 cadaver heads). Our results were similar to those of Lee et al. for both sexes, which may be because patients were of the sameace.

The area in the anterior skull base that needs to be removed depending on the pathology and extension of the lesion, as well as the function of the nasal cavity. The bone behind the anterior ethmoid artery is drilled only if olfactory nerve preservation is necessary. The posterior part of the planum sphenoidale and optic prominence are retained if the optic nerves are not involved. The distance between the openings of the optic canals inside the skull was 17±3mm(range, 13–21mm)when determined by Jho and Ha, a value that is 2mm wider than the distance observed in our specimens (15.13±1.69mm, range from 12.37mm to 17.82 mm).This differencemayderive from the racial background of the patient population. This width should be limited to 10mmif the bone of the posterior planum sphenoidale is drilled. The dura mater should be dissected along the midline and the anterior intercavernous sinus can be damaged by backward dissection. The bilateral olfactory tracts should be protected when the dura mater is cut laterally.

These results have demonstrated that endoscopic transnasal approach is feasible to expose the area from the crista galli to the posterior border of the planum sphenoidale, as found by other authors. The anatomic data as well as established anatomic landmarks associated with endoscopic surgery would benefit future clinical work. In the literature, some authors have used this technique successfully for the treatment of cerebrospinal fluid rhinorrhea, removal of encephalomeningocele, and resection of tuberculum sellae, planum sphenoidale, and olfactory groove meningiomas. Additional clinical trials will be necessary to further explore pathologies of the anterior skull base.