An astroblastoma is a rare glial tumor accounting for 0.45-2.8% of brain gliomas and occur in young adults with a predilection for the cerebral hemispheres. The coexistence of astroblastoma and arteriovenous malformation (AVM) in the brain has not been reported in the literature，hence this report. The potential role of the angiogenic factors that might have modulated the evolution of the neoplasm is discussed.

A 36-year-old man presented with a 6 day history of right frontotemporal headache， nausea and vomiting and the headache has worsened for the past 3 days. Neurological examination revealed left homonymous hemianopia and neck rigidity. Cranial computed tomography (CT) scan revealed right occipital lobe hemorrhage [Figure 1a]. The CT-angiography and digital subtraction angiography revealed right posterior cerebral artery malformation associated with an aneurysm [Figure 1b and c]. As the patient could not afford further studies and there was clinical deterioration，he was taken up for the surgery. The pre-operative diagnosis was a vascular malformation with aneurysm involving the right posterior cerebral artery and right occipital lobe hemorrhage. Patient underwent right parieto- occipital craniotomy，which revealed a highly hemorrhagic dark-red lesion in the temporo-occipital cortex with abnormal surrounding vessels. The lesion was well-circumscribed pushing borders and it was completely resected surgically along with vascular malformation. The post-operative course was uneventful. He did not receive post-operative radiotherapy. There was no evidence of tumor recurrence at the 5 month follow-up [Figure 1d]. The long-term follow-up is in progress. 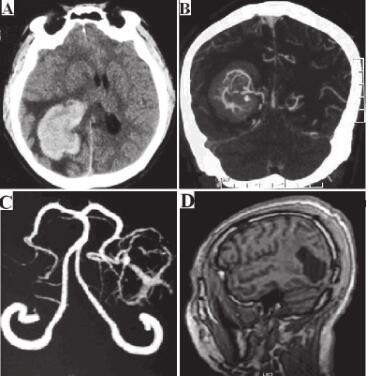 Histological features of the tumor were consistent with astroblastoma，in the same area，having abnormal and tortuously distributed vessels. We observed single and multiple layers of tumor cells forming prominent pseudorosettes around blood vessels，with short and thick cytoplasmic processes oriented toward central blood vessels [Figure 2a-c]. The nuclei were generally round to oval in shape. Tumor vessels were thickened，but not hyalinized. Patchy hemorrhage was observed. In the same area，abnormal and tortuously vessels [Figure 2d and e] were with markedly variable caliber，irregularly thickened walls and fibromuscular hyperplasia of the media were seen [Figure 2d and e]. Some of the vessels revealed internal elastic lamina on the elastic fiber staining [Figure 2f]. There was no appreciable mitotic activity in the tumor cells. On immunohistochemical analysis，the tumor cells showed diffuse strong positivity for neuron specific enolase [Figure 2g]，S-100 protein [Figure 2h]， glial fibrillary acidic protein (GFAP) [Figure 2i]， vascular endothelial growth factor (VEGF) [Figure 2j] and vimentin [Figure 2k]. However，they were negative for epithelial membrane antigen [Figure 2l]，synaptophysin，neurofilament protein and pan-cytokeratin. The Ki-67 labeling index was less than 2% in the tumor.

It was a rare situation that the occurrence of two different lesions of the central nervous system such as a vascular malformation and astroblastoma，discovered at the same time and in the same location. At operation，a well-defined lesion with pushing borders was noted.

The most cases of astroblastoma were seen in children and young adults like in this case. The first report was by Bailey and Bucy in 1930. They believed that astroblastoma originated from astroblasts， an intermediate stage between glioblasts and astrocytes. In a study using electron microscopy，it was proven that tumor cells of astroblastoma are intermediate between astrocytes and ependymal cells and thus，the possible presence of tanycytes is presented as the origin of astroblastoma. Histopathology showed characteristic perivascular pseudorosettes. These differed from the perivascular pseudorosettes in ependymoma， the astroblastoma rosettes having short and thick cytoplasmic processes. The cytoplasmic processes had blunt-ended foot plates and were attached to the basal lamina of blood vessels. Tumor cells were strongly immunoreactive for S-100 protein，GFAP and vimentin and the extent of hyalinization of blood vessels varied 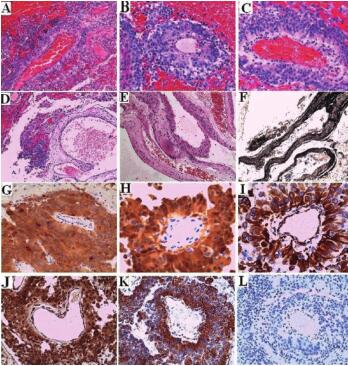 Astroblastoma rarely infiltrates into the surrounding tissue，especially in low-grade astroblastomas. This is an important characteristic to help distinguish the lesion from that of a fibrillary astrocytoma，which commonly infiltrates the nearby brain tissue. The lesion in this case was found well-circumscribed with pushing borders during the surgery. It enabled us to remove the lesion completely. Astroblastomas were classified into low- grade and high-grade according to histological findings. Low-grade astroblastomas included astroblastomas with uniform perivascular arrangement of pseudorosettes， low to moderate numbers of mitotic figures，minimal cellular atypia and predominant sclerosis of the vascular walls. High-grades astroblastoma showed cytologic atypia，compact cellularity，perivascular cells with high mitotic rates. In this patient，the Ki-67 labeling index was lesser than 2% and there was no appreciable mitotic activity. Tumor cell atypia was minimal. All these characteristics supported the diagnostic of low- grade astroblastoma.

In this case，the histology revealed atypical cells characteristic of astroblastoma and in the same area， AVM. This observation led to the possibility that the vascular needs for astroblastoma growth were most likely partly supplied by the AVM and that their concurrent finding in the same location in the brain was probably determined by a common genetic and molecular basis.

AVM is usually described as abnormalities consisting of tangled masses of tortuous arteries，veins and abnormal connecting channels that apparently result from the lack of development of the local capillary bed. However，the natural history of AVM remained uncertain. AVM was thought to be congenital lesion resulting from abnormal vascular development and many authors thought AVM as an active process with the ability to grow，regress and reappear. Vascular remodeling may be mediated by angiogenic factors such as VEGF. VEGF is responsible for endothelial cell replication，migration，differentiation and survival. The expression of VEGF has been found to be high in the endothelial layer and media of AVM vessels. We thought VEGF secreted by tumor cells binded to endothelial cells and might activate neoangiogenesis. It appeared that VEGF might be the possible underlying factor for the occurrence of both AVM and astroblastoma at the same site.

Because of the rarity of astroblastomas，there was no consensus regarding their optimal management. Some people suggested that the best clinical results were obtained after total or subtotal resection of the tumor，followed by radiotherapy. Adjuvant therapy is recommended for high-grade and recurrent cases. Others believe that total resection of these tumors should be a therapeutic goal since no recurrence of the tumor was found in the short-term. Good prognosis was almost associated with well-circumscribed tumors，which permit total resection of tumor in all astroblastomas. This case was a low-grade astroblastoma. Complete resection was possible in this patient because of the relatively clear border between the tumor and adjacent brain tissue. So，we advised patient regular follow-up without adjuvant radiation. No recurrence was noted until the last follow-up of 5 months and the long-time of follow- up was still in progress.